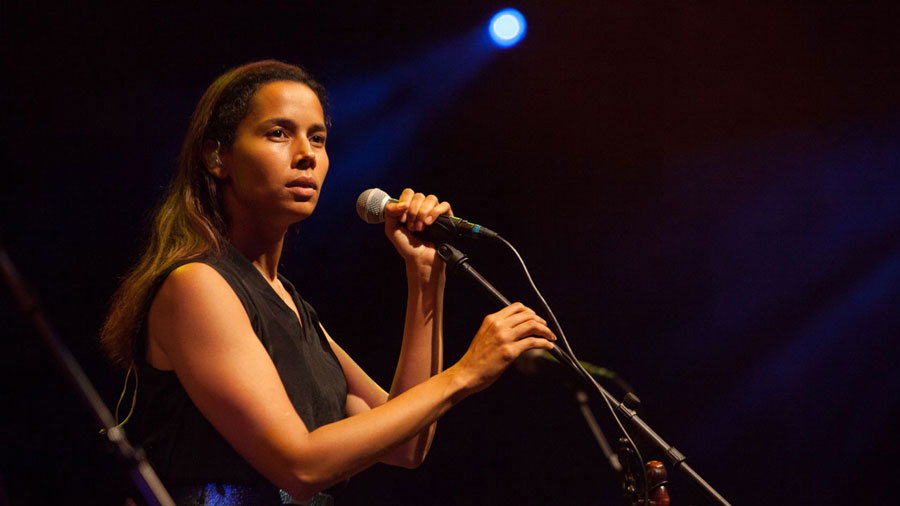 On her Facebook page, Rhiannon Giddens reveals. “I started singing at an ungodly age, standing in my crib and warbling at passing family members. I didn’t really think of it as a career until I went to the School of Science and Math and realized that I never wanted to do another algorithm. So I went to Oberlin Conservatory and did the whole opera/recital thing, burned out and discovered the banjo! The rest is history.”

And what a history, and what a present, it is turning out to be. Singer-songwriter Giddens is the co-founder of the GRAMMY Award–winning African-American string band Carolina Chocolate Drops, in which she also plays banjo and fiddle. She began gaining recognition as a solo artist when she stole the show at the T Bone Burnett–produced Another Day, Another Time concert at New York City’s Town Hall in 2013. She sang Odetta’s Water Boy with, as the New York Times put it, “the fervor of a spiritual, the yips of a folk holler, and the sultry insinuation of the blues,”

The elegant bearing, prodigious voice, and fierce spirit that brought the NYC audience to its feet that night, and audiences around the world since, was also abundantly evident on Giddens’ Grammy-nominated solo debut album, “Tomorrow Is My Turn”. The recording masterfully blends American genres like gospel, jazz, blues, and country, showcasing her extraordinary emotional range and dazzling vocal prowess. She since followed that success with the recently released “Freedom Highway”, a record that traces the power of African-American song from 200 years ago to today.

It has become abundantly clear that Rhiannon Giddens is taking her place as a peerless and powerful voice in roots music, and her appearance at our festival is to be eagerly, enthusiastically,  breathlessly anticipated.

“What was on display tonight was the performance of an artist on the cusp of a true critical and commercial breakthrough with a voice that was regal, confident and, at every turn, breathtaking.”  -The Musical Box