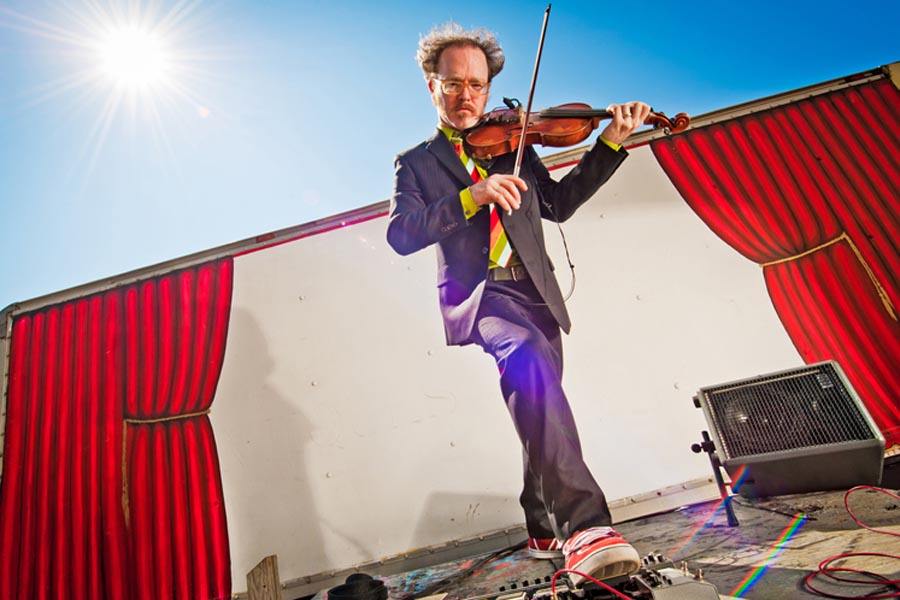 Casey Driessen has spent his career pushing the boundaries of fiddle music. With the release of his new album, The Singularity, the 34-year old virtuoso proves that the possibilities of one man, one five-string fiddle, and one pedal board are endless.

The Singularity, Driessen’s third record, is a solo album in every sense of the phrase—the only sounds listeners hear are created by the looping of fiddle and voice. It was self-recorded and self-produced at his home studio—which is really more of a laboratory—in between touring with The Flecktones, Tim O’Brien, and Darrell Scott, and opening for the Zac Brown Band. There aren’t even any guest musicians—unless you count Driessen’s daughter, whose in utero heartbeat was the inspiration behind “Heartbeat Kid,” an instrumental (and the subject of his 2012 TEDx Talk) that resonates with any parent who can remember the first time they heard the rapid thump of their child’s heart.

The album grew out of Driessen’s captivating live shows, where the audience would experience music as it was created and recorded in front of their eyes when Driessen, stomping his trademark red shoes over every inch of the pedal board, would lay down, then layer, then loop, several individual tracks on songs like “Billie Jean,” assembling parts like a musical Dr. Frankenstein. It was that Michael Jackson cover that first sent Driessen down the Singularity rabbit hole when, as a practice tool, he deconstructed the song, learning how its components interacted before working up an arrangement.

Driessen draws on a number of wide-ranging influences from Tom Waits to Stevie Wonder to jazz violinist Stuff Smith. He’s particularly drawn to the improvisational elements of bebop, the groove of R&B, and percussion rich global cultures.

Though the GRAMMY-nominated Driessen has participated in several genre-blending ventures, including Bela Fleck and Abigail Washburn’s Sparrow Quartet, at his core, he is a bluegrass fiddler, albeit one who honed his skills at Berklee College of Music.  Driessen’s arrangements are just voice and fiddle—the way roots music began, surrounded by what roots music can be.