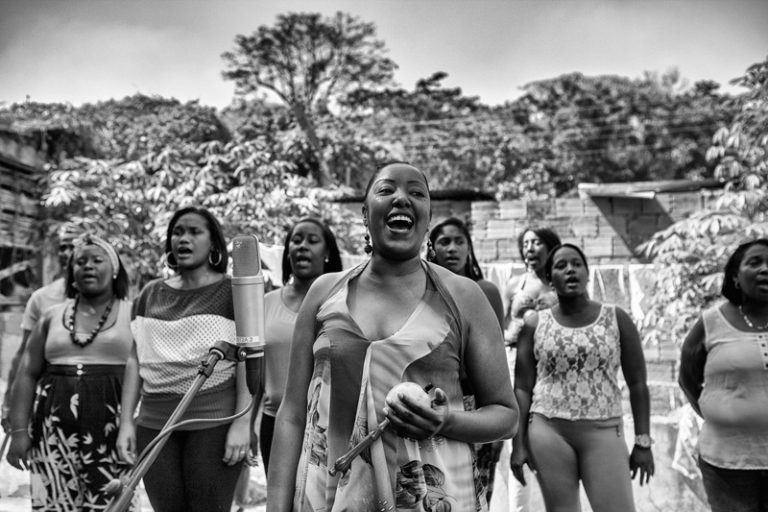 Betsayda Machado is a Venezuelan singer born in El Clavo, Barlovento, a community with a rich Afro Venezuelan tradition. Barlovento’s inhabitants today are descendants of African workers who once toiled in the cocoa fields, and exploited by land owners in the area. Nicknamed ‘The Black Voice of Barlovento’ Betsayda has been recognized since the age of seven as the most promising voice in the area by local leaders, and has become the carrier of a long tradition of nearly-extinguished genres of black music in Venezuela. Betsayda moved to Caracas in her early twenties, for the last few years has been acknowledged as an icon of Afro Venezuelan music, receiving attention from the media and others She has shared stages with Oscar de León, César Miguel Rondón, La Vida Boheme, Vasallos de Venezuela and many others.

La Parranda El Clavo is the local percussion and voice ensemble of El Clavo, a small town in Barlovento, Venezuela. Approximate population: 1500. For nearly thirty years they have been playing together for town festivities, funerals, new year celebrations and get-togethers as a way of sharing culture and community with their family, friends and neighbours. Singer Betsayda Machado started her career singing with them in the late 1980’s.

La Parranda El Clavo got the attention of director and producer Juan Souki during a field trip to El Clavo alongside Betsayda Machado. Since then Souki and Machado have paired up to organize together the first parranda tour in thirty years and the recording of a series of albums on Barlovento’s musical traditions. Their tour ‘Raíces’ traces the parranda member’s origins and will take them on a discovery trip to Africa.

We are just happy we’re a stop on their international journey.