Learn More About These Festival Families
Each story is unique but connected by their love for VFMF.

Join them in supporting the Festival and helping us reach our fundraising goal by donating now. 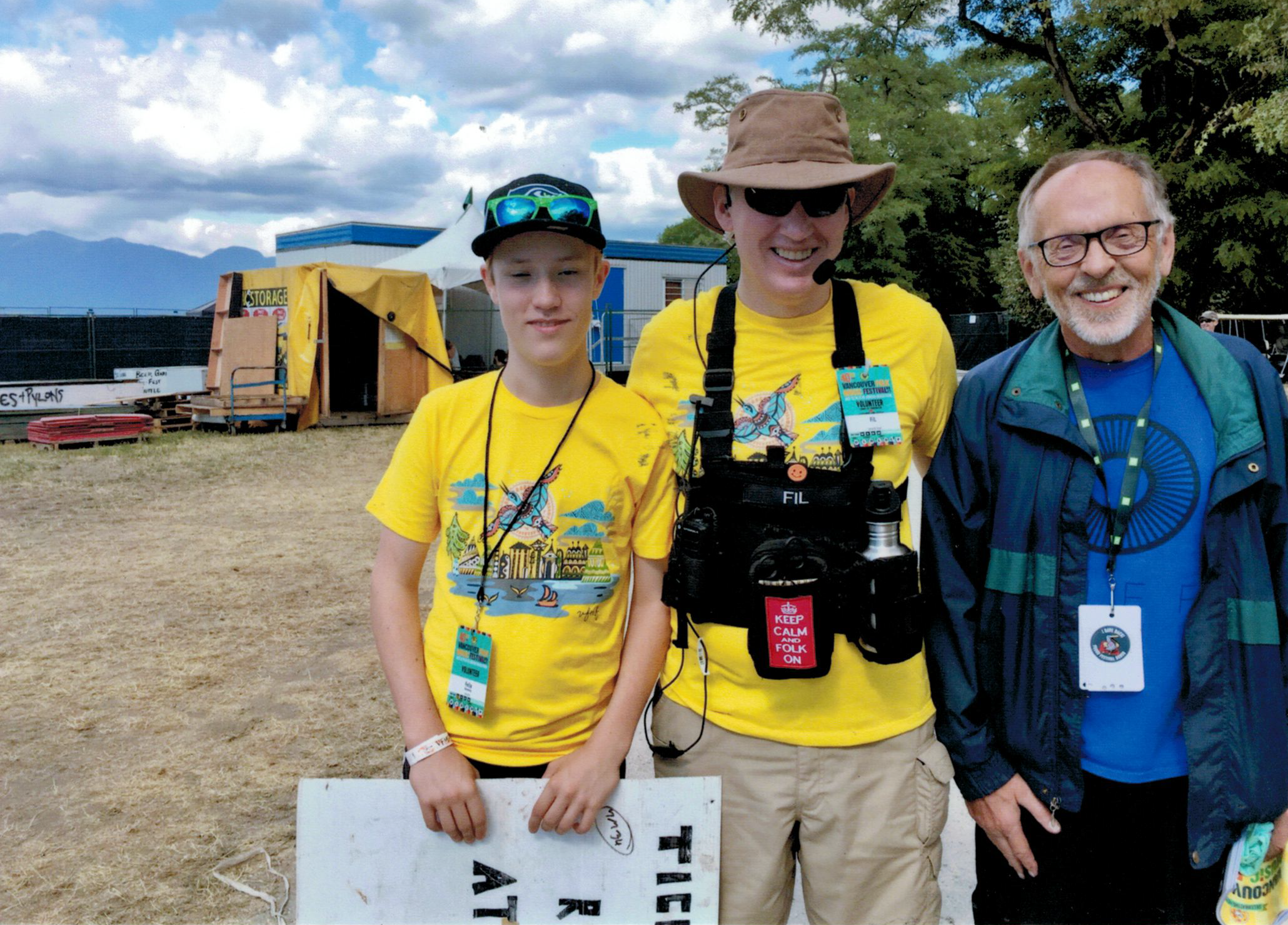 My wife, Veronica, began attending the festival in its second year. Our daughter, Jessica—who I can recall sitting at Pete Seeger's feet in the SUB Ballroom at age seven—came home from studying folklore in North Carolina in 1989 and started volunteering in the kitchen. That year was only the second time we missed the festival, but we figured that attending festivals (fleadhs) in Ireland was a legitimate substitute.

Then in 1990, following Jessica's report about what fun it was volunteering (even in the kitchen!), we decided to try it out too. Veronica started in the kitchen followed by stints in hotel hospitality at Gage Towers (where she found out why the Scottish band was referred to as "The Boys of the Loo") and several more years on-site hospitality (where she refused to let Dan Bern drive the golf carts) until she was too ill to continue. Meanwhile, I joined the shuttle committee, where I drove performers back and forth between Gage and Jericho Beach.  That was enjoyable until I heard about pre-festival transport, which I joined the following year with long-time coordinators Pat Hogan, Pat Davitt, and Will Kinch.  Our secret perk was that while perhaps we worked longer hours than other volunteers, we also finished our assignments early on Friday evening.  Our only complaint was never being issued t-shirts emblazoned with “Pickups”!

After finishing her M.A. in Folklore, Jessica went off to the UK for further study, marriage, and motherhood. When she returned in 2005, her husband, Fil Hemming, joined the security team and has been doing that ever since, even becoming certified in order to volunteer as overall coordinator of the team.  Last year my two grandkids, Felix and Ailsa Hemming, also joined the security teams, bringing the family up to three yellow t-shirts and third generation participation.

Meanwhile, I have also stepped up my volunteering level and joined the Board of Directors of the Vancouver Folk Music Festival Society, now completing my seventh year in that capacity as we prepare for our 41st year.

Long may we thrive! 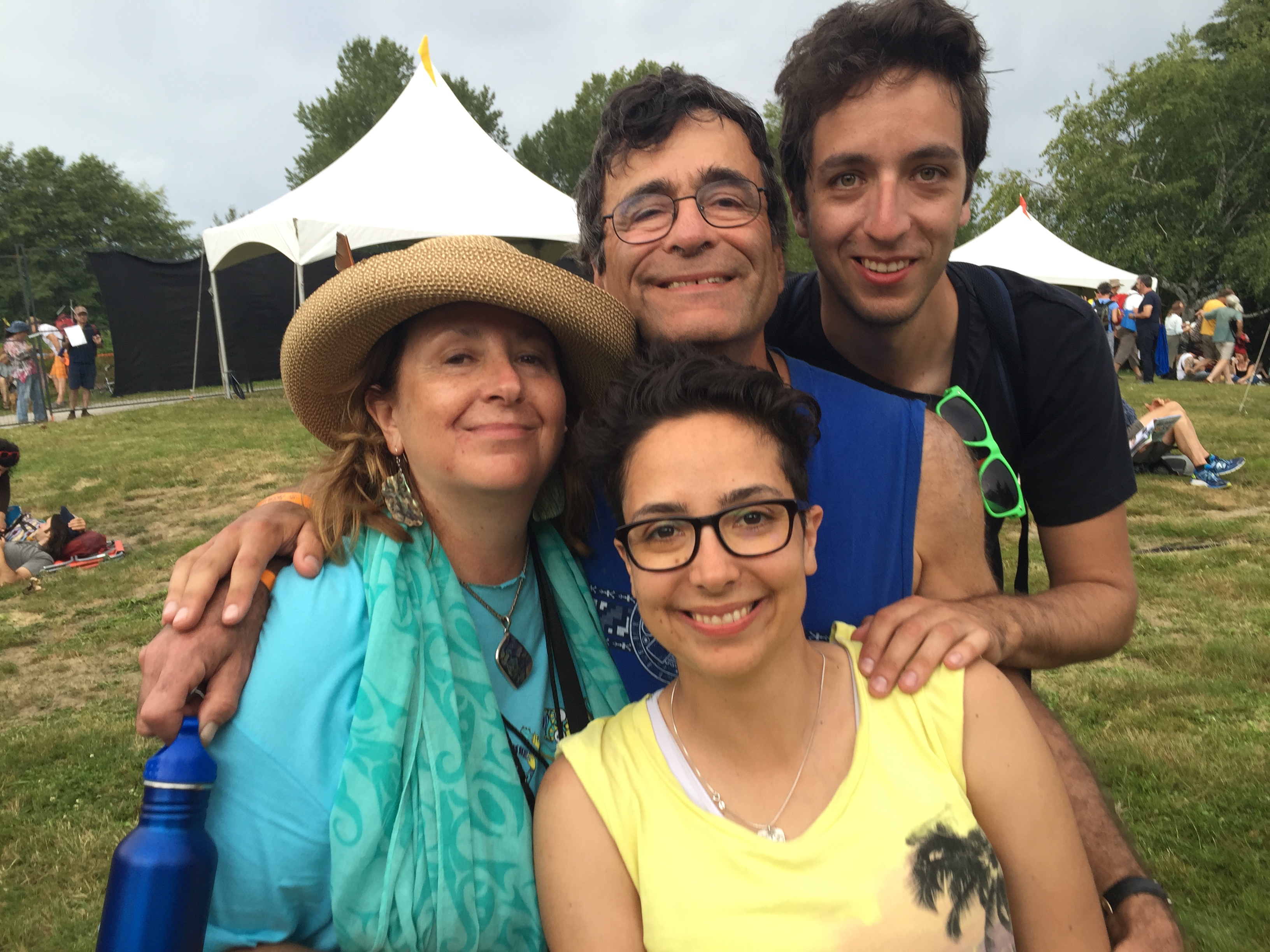 The Vancouver Folk Music Festival has become a cherished family tradition. I was at the very first festival in 1977 in Stanley Park in the pouring rain, until the clouds parted and rays of sun illuminated the likes of blues greats John Hammond and Roosevelt Sykes, pounding the ivories in an unforgettable set. The famous Canadian musician Stan Rogers sang amid torrents of rain, as did the astonishing Odetta, and BC's own beloved Pied Pear. I was hooked! From then on, I planned my summer around the festival every year, especially once it put down roots at my neighbourhood beach, Jericho.

1983 was an especially memorable year. Art Moses and I got married during the Folk Festival, on the lawn at Brock House on a Sunday morning (we decided to choose a weekend that guaranteed our friends would be in town). Some guests quickly changed back into their festival garb after the ceremony, but others came fully prepared with shorts and t-shirts under their wedding attire. The Sunday night after our wedding was an emotional evening concert. Just weeks earlier, Stan Rogers had perished in a plane crash, and the closing song of his famous anthem “Mary Ellen Carter” brought most of us to tears, as we swayed with linked arms in one big extended family.

Our eldest, Naomi, was also born in 1983 - on November 5 (yes, we had to get married, for those who do the math, but we didn't have to stay married for what will be 35 years!). Both Naomi and our son, Zev, were exposed to folk music literally in utero, so it was no small wonder when they became dedicated folkies like us. Of course, we spent years hanging out at the Little Folks music stage (still fabulous music!) until the kids got old enough to stay for all evening concerts and eventually to hang out with their own friends.

Our family has missed very few Vancouver Folk Festivals; I've missed only two in 41 years. It's been an annual opportunity to greet old friends, watch all our children grow up and some come back with their own babies, to listen and dance, and now increasingly in our demographic, to share news of illness and even death, to find joy and comfort; and most of all - to celebrate love and life.

We love you, Vancouver Folk Music Festival, don't ever leave our lives!

Our Vancouver Folk Music Festival family story begins in the very early days of the event, with my husband Keith and I attending first as a couple, loving the music and community we found at the festival. Not long afterwards we were joined by a baby, and then a toddler and baby in 1989, as our two children Evan and Elyse started coming along for the party. I always say to friends who are seeking childcare so that they can attend, “What do you need a babysitter for? There’s nothing better to do with the kids!”

I was a proud volunteer for years, initially on the community team and later in the kitchen, taking advantage of my natural early bird tendencies to cook breakfast for morning workshop givers and goers. As the years passed and the kids grew up, they followed suit, rolling up their sleeves to work in the kitchen with many of their friends. It was a great place to hang on summer days and nights for young musicians and music lovers.

I think we’ve maybe missed one year since those early days. It’s the multigenerational aspect I love the most – I recall being especially happy to bring my Dad before he passed, a wonderful memory for us to have with him. We’re fortunate to live within walking distance of the park, so we all come together at the house and travel over as a big group. It continues to be a weekend we look forward to every summer, an enjoyable time spent with friends and with each other.

My “family” consists of a variety of great folks, the number fluctuates from year to year. Some of my folks I have not met in person but I know they share same passion as I do for the Vancouver Folk Music Festival, and that special weekend each July.

This all started for me twenty-five years ago. I got together some folks who had a couple of things in common: wonderful music, and a group ticket discount! Each year in May I send out the “notice” along with the prices and my “rules” for belonging to the group. People are invited to send the email along to their like-minded friends, and over the years my “family” has grown to about 55 adults, a growing number of elders, and a smattering of students. I retired from leading the charge last year, so here’s hoping someone takes the reins!

In the early days, I was often seen in the front of the line at the east gate. There were “runners” and “packers”; each with a defined task during the Birkenstock 500s of the early years (with Birkenstocks as prizes) to secure great blanket locations. Recently it has been a lotto system. Nonetheless, we are all there to enjoy three wonderful days of joyous music and relaxation.

Families come in all different forms, with a variety of members. My “Folk Fest Family” is the best. Many are annual contributors to the festival. You can be also!